In the midst of the crisis and forbidden touches, we are touching a new future!

Through five editions, since 2005, the Touch Me festival has so far explored dark matter, time, pleasure, the abuse of intelligence and energy. Evolving at the intersection of art and science, this year the festival is bigger than ever!

The program of exhibitions, sound performances, lectures, conversations with artists, workshops and the film program brings together works from the field of research and interdisciplinary art and experimental sound. In addition to a thematic program that explores new forms of coexistence between living beings, nature and technology, the festival brings an exhibition and performance program under KONTEJNER's curatorial concept as part of two European projects: EMAP – European Media Art Platform and Re-Imagine Europe. 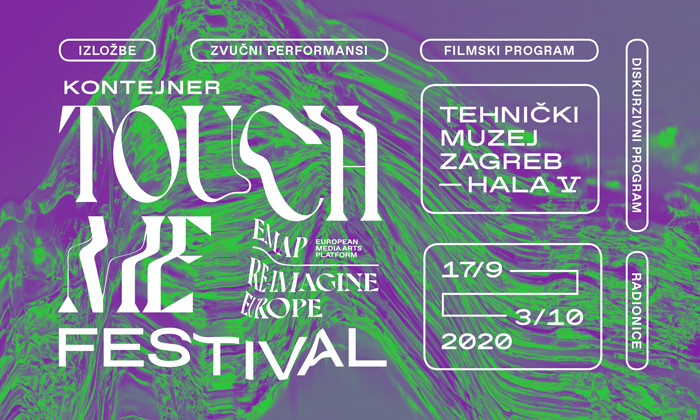 Enter an experimental laboratory that explores new possibilities of connecting among living beings, nature and technology. Artists question the limits of what makes us human and expand the concept of the body – that of man, bacteria, animals, plants, artificial intelligence. These living art projects explore ways in which man can act in an ecosystem as a permeable, porous being subject to the actions of others. Like a floating blue stone, humans are complex creatures filled with cavities: porous beings interacting with other porous beings. Finding different entrances, this exhibition explores these cavities.

The film program attempts to digest anthropocentric ideas about the world and offer a posthumanist idea of the world based on solidarity and the joint work of trans-species. You can watch the films throughout the exhibition, as part of the exhibition.

Topics such as pollution, communication between species, climate change and visions of the future are the focus of the works of seven artists and art collectives who step into many exciting and experimental territories with their research and reflection. The exhibition presents a selection of works produced within the network

EMAP is a network of 11 European cultural institutions and media arts organizations that annually award grants for the production of works to emerging European artists. The group EMAP exhibition presents a selection of works based on natural sciences and cybernetics and produced within the network from 2018 until today.

Exhibition Opening: She Was Unaware of Her Borders. / Ego in Habitat.