Supertoon animation festival for the tenth time in Šibenik

The jubilee edition of the animation festival will be held this summer in Mala loža and Gorica and in a number of city exhibition spaces.

The tenth edition of the Supertoon International Animation Festival will be held in Šibenik from July 20 to 24, 2020. The jubilee edition brings the world's most current short animated films in five competition categories and hosts a number of renowned animators, directors and producers from Croatia and the world, and will be enriched with completely new content compared to the previous ones.

"Festival films are made for screenings on big screens, and film festivals are places of meeting and communication between authors, producers and audiences, which are perhaps even more important in these times than usual."

Despite the situation around the new coronavirus pandemic and a possible second wave of infection, as well as the uncertain fate of the tourist season, budget revisions, painful cuts for independent culture and other misfortunes, the festival management decided that the Supertoon Festival in Sibenik will take place.

Festival director Slave Lukarov explains the decision not to hold the festival in, say, an online version or postpone it "for some better times" with the words: "Festival films are made for screenings on big screens, and film festivals are meeting and communication places for authors, producers and He emphasizes how important the continuity with which the audience is built is, and how this is the tenth year of the Supertoon – the eighth in Šibenik – he considers it a negligible presence. "It is also extremely important that in times of crisis, citizens are not denied culture and art, which make life if not meaningful, then at least more beautiful and richer," Lukarov added.

Animated films selected through a competition will be screened in the evening in multiple blocks and competition categories, and a list of them can be found on the festival’s website .

The winners among the films in the competition will be decided by the festival's international jury. The jury for the Grandtoon and Studentoon categories will consist of director and animator Martina Meštrović, director and animator Bruno Razum and Tamás Patrovits, Hungarian director, animator and artistic director of the Primanima festival.

The jury for the Supercomm and Supertune categories will include comic book author and illustrator Igor Hofbauer, also the author of this year's festival visual identity, director and animator Katrin Novaković, and Bruno Tolić, director, animator and illustrator. 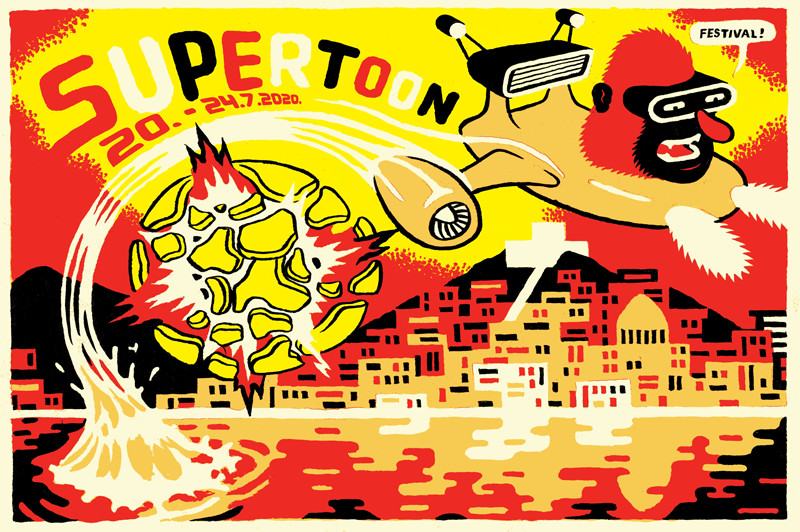 An animation workshop for the youngest will be held again, and some of its participants will once again make up the Supertoon Festival Jury for the Planktoon category of short animated films for children.

With a host of accompanying screenings of out-of-competition films, conversations with filmmakers and other educational and entertainment content, a novelty at this year's festival will be the hosting of representatives of regional independent comics scenes. In addition to the group exhibition, which will bring representative works of authors and collectives, on the streets and squares of Šibenik will be held a comic book sales fair and the production of graphics using the screen printing technique, as well as individual presentations of comic artists. The tenth edition of the Supertoon will present the 18th edition of the comic book Komikaze, edited by Ivana Armanini, and the graphics and comic book editions of the Belgrade collective Matrijaršija, the independent comic book festival OHOHO! and New Age and the recent Split and Zagreb comic book scene.