Performance Night is a site-specific event that will take place on October 17, 2020 at several locations in the city center and in front of the Museum of Contemporary Art.

As part of the Night, the Domino Association presents artists and their installations, performances, spatial interventions and actions in public space, and models of interaction, communication and participation with the audience that provide new perspectives in relation to cultural-socio-political context and experiment with art forms and poetics.

Everything is possible except the impossible space for performance

Work in the form of advertisements on billboards 3rd shift Milijana Babić and the Center for Women’s Studies Rijeka talks about the important topic of socially imposed notions of female beauty, focusing on the functioning of women in the context of the phenomenon of work – both paid and unpaid household.

Nina Kurtela, motivated by the new situation caused by the coronavirus pandemic and the global movement restriction that we are all facing in some way, represents a creative intervention on traffic signs in the public space Untitled. Traffic signs that are normally set up to give directions or provide information to road users this time suggest some new reflections on space, time and movement, opening up space for choreographing some new realities and / or fictions.

Antonio Grgić plays in the Monument returns works of art to the citizens, inviting them to participate in a participatory musical performance with the monument Shooting of Hostages on JJ Strossmayer Square.

Petra Mrša presents an installation in the form of Landscape flags, which is the result of numerous post-corona walks through the city, when the author collected discarded objects from the streets as traces (and evidence) of human habitation, while in a scattered walk through public space. of the city.

In the performance Caress, Selma Banich problematizes intimate human contact during the pandemic and urges the audience not to forget the importance of (safe) physical contact, as well as Nika Bokić who shares the fanzine and opens the SOS telephone line for Safe Embraces in the new normal.

Vladimir Novak places the light-sound installation Parameters in the sculpture Eyes of Purification by Miroslav Balka in front of the Museum of Contemporary Art and thus establishes a dialogue about changes through processes of examining the conditions of artistic work and factors influencing the work itself in its creation, performance and presentation.

Vlasta Delimar and Milan Božić point out with their bodies the consequences of the earthquake in Zagreb with the work Silence of Living Sculptures in the Silence of Damaged Houses. Their sculptural bodies are identified with damaged houses that by the time of the damage were supposed to be like a picture of a universe that was brutally disrupted. The presence of living bodies of sculptures transfers their energy to damaged houses as an attempt to revitalize and rebuild. 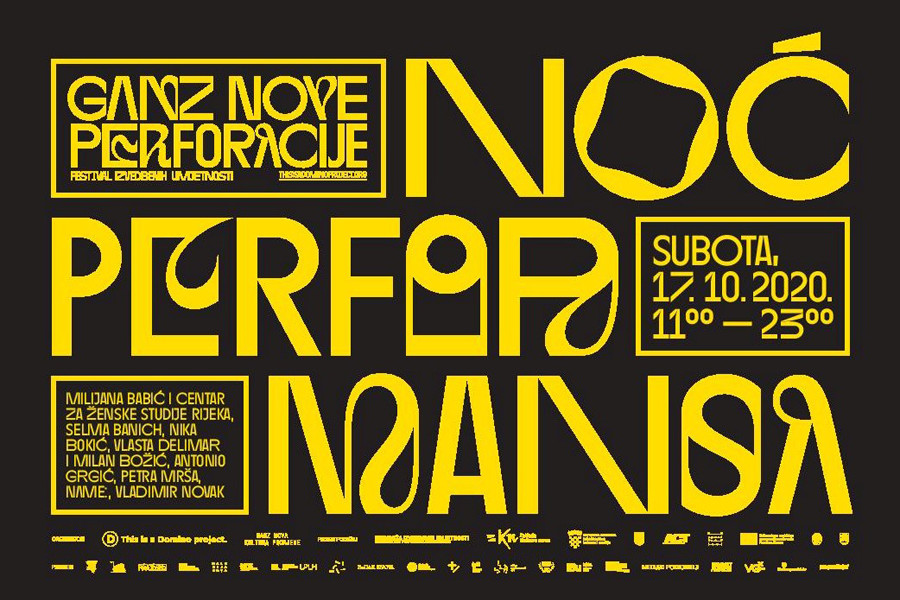 Among the international guests comes the Slovenian artist name: whose work Ping-pong talks about illegal “push-back” actions against immigrants carried out by the border police. The author reflects on the phenomenon of fenced state borders and ways of solving interstate problems, which often turn into endless situations of giving proposals, conditions, ultimatums, calls, drafts, recommendations from one state to another in the field of state, economic, religious and bio policy.

In a year that seems like a poorly written script for an unconvincing disaster film, with physical distance as the only possible model of living, Performance Night puts the thematic focus on the re-invention of space for art and mutual encounters. Performance has always taken the position of antagonist and outsider who, with distance in consciousness, challenges cultural norms and pushes the boundaries of traditional art forms …