HNK moves to the stage under the open sky

See what to expect

The Croatian National Theater in Zagreb has started with a traditional and rich program of events in front of the theater.

The opera has prepared four musical evenings and will begin on June 9 with Italian Fantasy in collaboration with the Italian Institute of Culture. The audience will be able to listen to the most beautiful parts of operas such as Carmen, Traviata and Nabucco on June 13 at 8 pm, and two days later Croatian operettas will be sung in front of the theater by the Academy of Music and in collaboration with the Academy of Arts in Split.

On June 17, the HNK Drama will solidify with artists from Ukraine, and a special Evening of Solidarity will feature performances by Maria Štofa and Oleksandra Bartok, actresses from Ukraine , who mentioned that they hope to show the Zagreb audience the importance and soul of Ukrainian culture.

A treat for the closing of the Summer Evening Festival in front of the Croatian National Theater in Zagreb will be a big musical party with music by Prljavo kazalište, Haustor, Azra and Film performed by Ante Gela, Nikša Kušelj and Drama actors . It will be another wonderful story in the place that was part of the New Wave in the 80's on the move Zvečka, Kavez, Blato… With the incredible voices of our actors and the man who holds all the strings in his hands and that is Ante Gelo, said Nikša Kušelj while Ante Gelo continued, expressing his satisfaction that he will be part of this "gig" in front of the heart of the city as he called the HNK building where the greatest hits of Zagreb's New Wave will be sung on July 1. 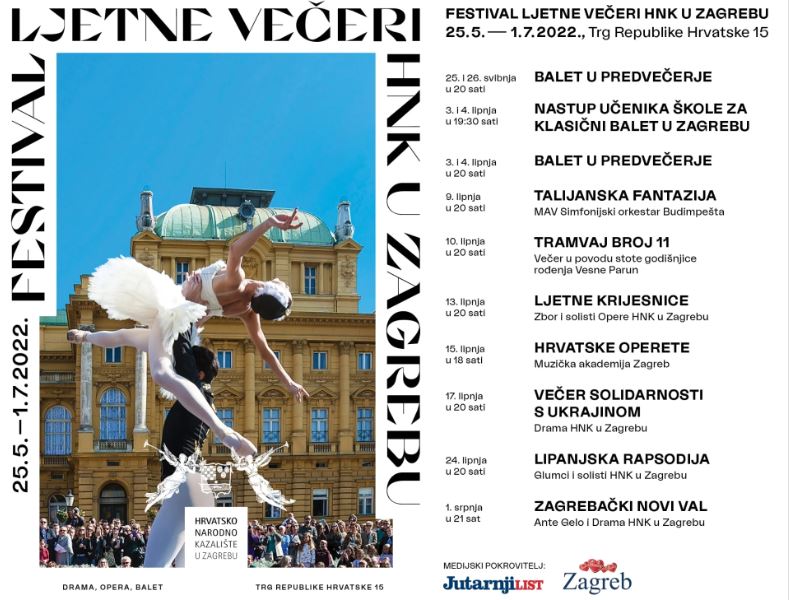