Everything is ready for the celebratory edition of the Jazz.hr/jesen festival

The audience can watch all the concerts via live streaming

This year’s Jazz.hr/jesen festival celebrates its big, 30th birthday, and in the “Blagoje Bersa” hall at the Music Academy in Zagreb from October 14 to 17, the audience will have the opportunity to listen to great musicians from the domestic and foreign jazz scene, and concerts will be available via live streaming on HRT , while the concert of the Jazz Continuo trio on October 15 will also be available live on HTV3.

Vladimir Babin, Elvis Penava trio, The Cool Jazz Duo and David Gazarov will open the celebratory edition of the Jazz.hr/jesen festival on October 14. At the concert entitled “MUSE of prof. Jazz ”audience at the Academy of Music will have the opportunity to listen to their works.

The audience will be able to listen to Boško Petrović’s music on the second night of the festival, on October 15 this year, performed by the Jazz Continuo trio, which remains faithful to the special sound of the vibraphone-guitar-bass line-up.

Filip Novosel and Tihomir Hojsak arrive at the festival in the company of drummer Žan Tetičkovič on October 16. Tamburitza player Filip Novosel and double bassist Tihomir Hojsak began their journey in 2016 as Bow vs. Plectrum. With their unusual instrumentation and original authorial approach, they made a mark on the Croatian and world scene.

Singer-songwriter Lucy Woodward will close the celebratory festival Jazz.hr/jesen. She is a singer whose music is rooted in blues, soul, jazz and pop. She has sung back vocals with legends such as Rod Stewart, Celine Dion, Barbra Streisand, Joe Cocker and Chaka Khan, and with her vocals and songs she has contributed numerous recordings and performed with various big bands around the world. During her enviable career, she has released four albums and is currently working on a project inspired by music by Peggy Lee, whose 100th birthday is celebrated by the music world this year.

The Jazz.hr/jesen festival will also pay tribute to Ladislav Fidri. Photos marking the work of this great composer will be presented on the official website and social networks of Jazz.hr, and the Croatian Society of Composers will present him with a plaque for his contribution to Croatian music on the occasion of his 80th birthday. An exhibition of photographs “Portraits of Jazz Musicians” by Davor Hrvoje, artistic director of the Jazz.hr festival and music journalist, has been opened and can be viewed in the “Bogdan Ogrizović” library until October 19.

The organizer of the Jazz.hr festival is the Croatian Society of Composers. The main idea of Jazz.hr is to enable the local audience to come to the concerts of the highest quality jazz musicians, to educate young musicians through concerts, workshops and direct cooperation with world stars, as well as to arrange international cooperation, by opening the door to Croatian jazz musicians for performances abroad. stages. 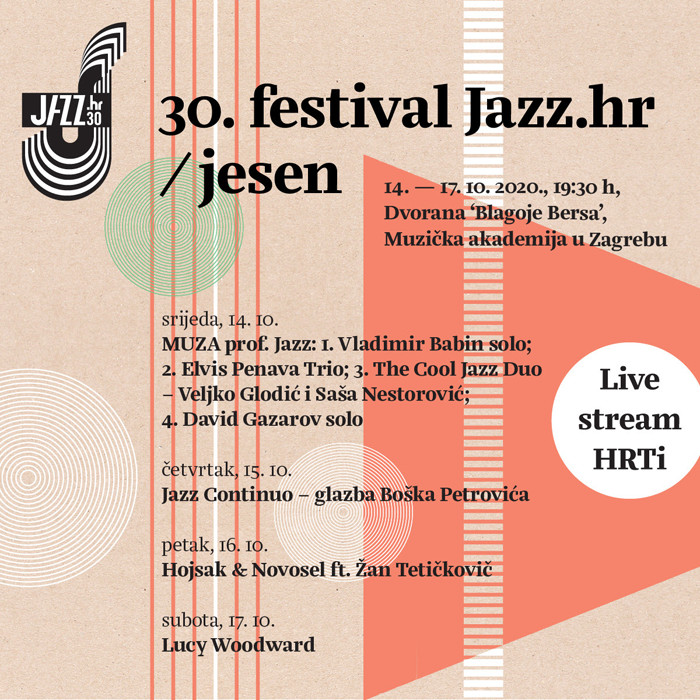