A film festival dedicated to design, art and architecture!

The International Film Festival dedicated to design, art and architecture, DA2 – Zagreb Design, Art & Architecture Film Festival will be held online from 20 to 27 October 2020, organized by the association Pari pikule. After last year’s successful edition held in Zagreb, this year’s festival has found its place in the virtual space and will be able to be watched by audiences from all over Croatia. The program is of a competitive nature, and includes eight Croatian premieres of award-winning films about world creatives and their works. In addition to DA2 films, in cooperation with the online platform R +, it also brings a series of moderated conversations with Croatian professionals entitled What YES ?. 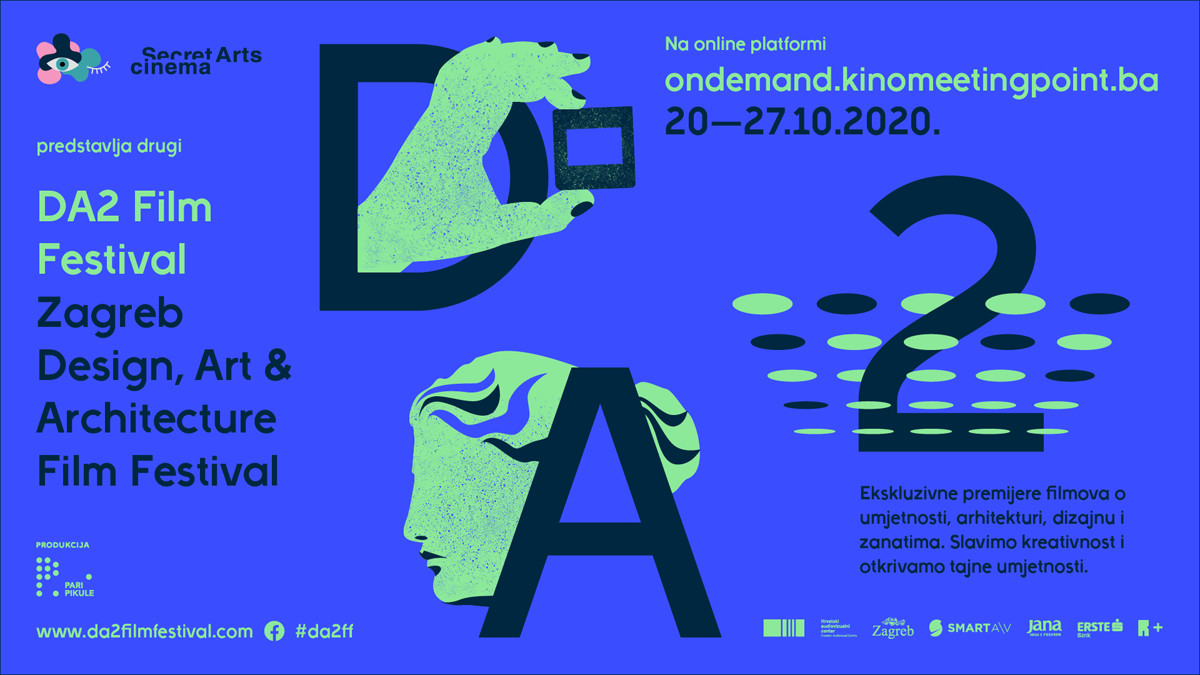 The achievements in the focus of the second edition of the DA2 Film Festival are inspiring stories about world-famous authors such as Gian Lorenzo Bernini, Alvaro Aalto and Marina Abramović, but also about some we may not have heard of, such as the distinctive Spanish street art artist and sculptor Okuda San Miguel, a war photographer. Jana Grarupa and Benedette Barzini, today fierce critics of the fashion industry that graced the cover of Vogue in the 1960s.

Homecoming – Marina Abramović and Her Children (2020) directed by Boris Miljković, who had its world premiere at the Sarajevo Film Festival, gives an intimate insight into the Belgrade finale of the traveling retrospective exhibition Marina Abramović – Cleaner. She accompanies the artist during the preparations for the exhibition and describes the dilemmas that occupied her during her youth in her native Belgrade.

With the life and work of one of the world’s most exciting street art artists of today, will introduce us Equilibrate by Okuda San Miguel (2018), directed by Miguel Batista. The Spaniard Okuda is known for the distinctive style of colorful geometric patterns he applied in his most famous work, the Temple of Chaos in Llanera, Spain. The film follows the artist for a year in the making of a magnificent 25-meter sculpture, which will be burned at the grand finale of the Valencia Fire Festival.

From the world of contemporary art, we travel to the heart of baroque Rome, with the documentary Bernini Tells Bernini (2018) directed by Andrés Arce Maldonado. The story of Gian Lorenzo Bernini (1598-1690), an outstanding artist: builder (Fountain of the Four Rivers, Triton Fountain…), painter and sculptor (David, Apollo and Daphne and Ecstasy of St. Teresa donosi) is brought by his direct descendant Fabiano Forti Bernini . With a lot of warmth and zeal, he takes viewers to explore beautiful Rome, but also reveals lesser-known lines from his life, such as the episode in which Bernini almost killed his brother out of jealousy.

The three titles will take us on a film walk through the history, present and future of architecture

Aalto (2020) by Finnish director Virpi Suutari first shows the intimate love story of Alvaro and Aino Aalto, Finnish masters of modernist architecture and design who shared a passion for man-made organic architecture. The film will bring viewers closer to their creative process and show famous buildings with their signatures from around the world. We will immerse ourselves in the colorful history of modernism and along the way we will meet the Rockefellers, Le Corbusier and László Moholy-Nagy.

Making a Mountain (2020) directed by Rikka Selin Fokdal and Kaspar Astrup Schröder follows the origins of the magnificent Danish architectural project Copenhill, the cleanest waste incinerator in the world topped by an artificial ski slope. This film symphony follows the main characters on the construction site, led by the famous Danish architect and visionary Bjarke Ingels.

Human Shelter (2018), directed by Boris Bertram, explores the different ways people from all over the world create their homes: in a refugee camp near Mosul, wild settlements in the Gulf of Lagos or in the six square meters of Tokyo’s megalopolis. This existentialist film provides an answer to the question of what a home really is.

The story of one of the most important war photographers of today is brought by the film The Photographer of War (2019) by Boris Bertram. Jan Grarup has been photographing people fleeing hunger, climate change, corruption and war for more than 25 years. He is a contributor to the New York Times, The Guardian, Le Monde and Politiken and the winner of eight World Press Photo Awards. In the film, we follow Grarup on the battlefields around Mosul in Iraq, as well as on the home front where he faces the demands of fatherhood, preparing sandwiches and doing laundry.

A powerful personal documentary by Beniamin Barrese The Dissapearance of My Mother (2019), screened at Sundance, takes viewers behind the scenes of the fashion industry. The protagonist, also the director’s mother, journalist and university professor Benedetta Barzini, was once a successful model who befriended Dalí, Strasberg and Avedon in the 1960s. We meet Benedetto in his seventh decade of life, and the aversion he feels today to the world of visual representation and superficiality forms the backbone of this great film.

The festival opens on Tuesday, October 20

The festival opens on Tuesday, October 20, with a screening of the film Homecoming – Marina Abramović and Her Children, and all titles from the program will be available from October 21 to 27 on the online platform ondemand.kinomeetingpoint.ba. After a simple registration procedure, films can be rented for 5 euros, or 35 euros for a package that includes 8 films. After the first launch, the movie can be watched multiple times within 48 hours.

The DA2 Film Festival is the first festival in the region to bring together films on design, architecture and art. It is part of the Secret Arts Cinema platform, a program of thematic film screenings that celebrate creativity organized by the Pari Pikule association.