Escape from the hot asphalt in the wider center of Zagreb

Socializing by the river will last until the beginning of October, and this year the festival program is much stronger and richer

How many times have you looked at the Sava river and wanted to spend some time by it, relaxing or hanging out with friends? The banks of rivers in many cities are places for socializing, entertainment and moments that are long remembered. After two successful years, the Green River Fest is coming again to the meadow by the Hendrix bridge, next to the Sava river, and from 06.07. until 02.10. brings a rich and attractive summer program.

A new generation of festivals

It is fondly called the greenest festival, because it reuses the past, reduces the present and recycles the future. Green River is a new generation festival, which represents a step forward in the direction of a sustainable future and promotes and encourages the development of green tourism in our city. It offers Zagreb residents and tourists an attractive tourist experience, in harmony with nature.

The wish of the organizers, the association Nature for All, is to bring life back to the river, and they were inspired by the former peak of the Zagreb summer – the Sava bathing and sunbathing area. Visitors can expect a solar beach with solar showers and sunbeds, as well as plenty of musical treats. The first of them is the Stampedo group concert, July 6. from 8.20 p.m., and on Saturday 9.7. From 9:21 p.m., the green dance floor will be taken over by the legendary DJ Fuki from the former club Jabuka.

There are also numerous interactive workshops, exhibitions, lectures, gastronomic stories and sports activities. Cult and once very popular women's sunbathing area in Sava – 21st century Babinjak is designed on Wednesdays as a women's circle, which will host many inspiring, popular and strong women, and sometimes it will turn into boards that mean life. The first guest, who opens the festival program, arrives on July 6 around 7 p.m. Kornelija Benyovsky Šoštarić, a popular "gardener" and author of several books, will be happy to share useful tips on growing plant crops and creating mini gardens. Babinjak is also expecting Mirela Holy, MP and politician, Danka Derifaj, award-winning journalist , and there will be other famous faces.

Fans of quizzes will write down 10.07. and drop by around 8 pm for the first of a series of music and film quizzes "Listening and Games", by Marina Orsag&Sanja Pandurić. A special program is intended for the youngest, as well as for everyone who feels that way. In addition to recycled workshops and performances, they will be able to test their skills in badminton, volleyball, rugby on grass, table tennis and speedminton, try to master the slackline, or throw white, schnapps or preferences. 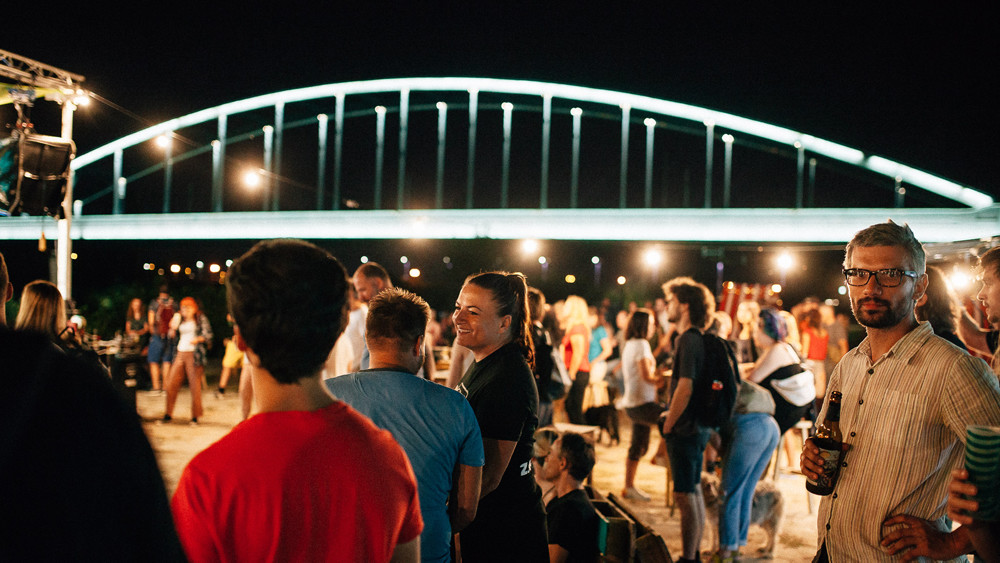 Impressive exhibitions and cinema under the stars

The floating thematic exhibition "Life on the River" is diligently prepared by a dozen street art artists. They will paint canvases, made by the Humana Nova association from pieces of old textiles. No matter where it is, you look at an exhibition in the air, and it gives you shade ? But that's not all, because the Jura solar straw catfish is arriving at Green River in the form of an 8-meter-long installation. It will be produced on July 12, 13 and 14. association Slama Art with artist Nikola Faller in cooperation with the festival organizers. There will be solar panels on the tail, so thanks to the sun's energy, it will glow in the dark. We believe that it will become the most popular photo point of the Festival. Be sure to come and check if the Jura catfish was just a legend or if it is about to become one!

Visitors will spice up the hot summer evenings by watching movies under the stars, and in cooperation with the Museum of the City of Zagreb, an exhibition Zagreb in a postcard with many motifs from the former bathing area is being prepared. ART BAZAR is the name of a corner intended for young artists, where they will exhibit and sell their works every Friday and during the weekend, let's support and encourage them in their artistic creations.